I initially found masks really unbearable. I eventually figured out it was because I was unconsciously holding my breath to avoid fogging up my glasses. So I when I wear a mask I take off my glasses - problem solved, I can breathe! But now I can't see very well. My left eye is very nearsighted, my right eye only moderately so.

I went so far as signing up to get an eye test for lasik. I got cold feet though. In the questionnaire they mentioned that fixing nearsightedness can result in mild farsightedness as you get older. In the shower I noticed how great my very nearsighted eye was seeing close up - crystal clear - (in comparison to my only mildly farsighted right eye which was a bit rubbish at it), and decided I love my nearsighted eye and it would serve me well when I am trapped inside a nursing home with nothing to do but read anyway.

I'm thinking a step between glasses and surgery might be contacts. I've always hated the idea, but they might serve as a good intermediate solution for the whole mask thing.

I don't know why I keep doing these, because I'm always really bad at them.

What was the last thing you purchased second-hand?
Roller blades on ebay. This was a mistake, becaues I am bad at roller blading and have only used them once since I bought them. Plus they're very hard to use outside - it's just not smooth enough. They're really an indoors thing.

What’s a dish you cannot resist a second helping of?
...Pringles?

How many seconds can you go right now without blinking?
I lack the attention span to complete this task

Whose second album is much better than their debut album?
Uh...

What’s something for which you were runner-up?
Happy cow mooing contest. In 2nd grade.

1. If you could build a dream house, what rooms would it have?

A library, a sewing room, a craft room, an art studio, a LEGO room, offices for every member of the family, a tabletop gaming room, a toy room, and gaming console room with plenty of room for dance games and band games. An indoor pool - is that a room?

Oh and a room that was mostly just a wall to wall bed.

2. What is the best dessert in the world?

3. What is your favorite thing to do on vacation?

Swim, or at least it was until I had kids. It's still a lot of fun, but anxiety inducing, because drowning.

4. What is your favorite time of day?

5. What relaxes you more than anything else?

Boring answer - nature. This relaxes anyone!

1. Would you rather have the unpredictability of live theatre or the predictability of a movie?
Well that's a leading question! My answer has changed a lot - I formerly would say I didn't like theatre. I think it's because plays sold to adults are just more boring on average (please, not another showing of Death of a Salesman!) but I also loved live musicals as a kid. Now that I'm going to a lot of kids' live theatre, I really love it, it's just really fun. Going to a kids' movie, by contrast is really boring. The rub about live theatre is that it's more expensive, and so when you get a dud it really ruins your day. I'm looking at you, Tabby McTat! That one was rubbish.

2. Do you prefer the symphony and/or opera to a live band or the other way around?
I... don't go to see live music. I'd pick symphony though, if pressed. I think I've been to a total of one opera (for school) and one live band, and definitely at least one symphony, I think.

3. When you go to a museum, where do you head first?
It depends on the museum.

I do have particular patterns per museum. For instance, I didn't know the Ashmolean had an Egyptian wing until last year - like I'd been to this museum 10+ times before I figured it out! It's because the only obvious way to get to the wing is by turning left from the front entrance, and I'd always start my museum crawl by turning right and going down the stairs to the basement level - and so I'd never end up there. Technically you *can* get to the Egyptian wing from the basement floor, but it requires you to walk *through* the food court and walking up a flight of stairs- it almost feels like you're going where the kitchen would be - completely not obvious! And you can't get there are all from 2nd floor up.

4. Would you prefer a pub crawl or a sampling of beer or wine in one restaurant?
I've done a pub crawl, in that I made it to like max 3 pubs? Might just be 2, actually. I guess it's fun. I've never ordered a sampler in a restaurant. Dunno. I guess it depends on how much walking I feel like doing that night.

Arguing with what I thought was a complete idiot on Twitter thinking he's just some rando and it turns out he's a game programmer with 100k followers, went to UC Berkeley. I mean, it's a puzzle game, surely he can logic, but my mind is kind of blown by how he can program his way out of a paper bag given the lack of rigor in his thinking.

Basically, his argument was that the fact that Li Wenliang died, and was only 33 years old, meant that the overall fatality rate for everyone infected being 1% - which was estimated by a team of expert epidemiologists and based on real actual data- was too low.

Anyway, it's an interesting problem to figure out how his cognition went astray. I think it went something like this:

* News says mostly killing older people.
* News says famous doctor died of it. Only 33. This contradicts mostly older people thing.
* The fact that I know one 33 year old died means that 33 year olds dying is an expected and probable event.
* A probable event (33 year old dying) being less probable than an old person dying must mean and old person dying must be much more probable than I previously thought.
* I previously thought it was (5%-10%)?
* Ergo 1% is much too low an estimate for infection mortality rate.

In case you aren't aware why this is a completely bad and wrong train of logic, well there are a lot of reasons.

Li Wenliang being in the news and being 33 doesn't actually make this 33 year-olds dying more likely. This is a cognitive bias we all have; if we see something in the news we mentally raise its probability. This is often wrong. It's called the availability heuristic. https://www.verywellmind.com/availability-heuristic-2794824

Except the thing is don't actually *have* numbers on what percentage of people are killed by age, because age at death and ... death... is collected at the same time. Estimating total case fatality rate by using age specific case fatality rate is putting the cart before the horse! These estimates for fatality rate for specific age brackets are ALWAYS worse than the total fatality rate for all ages because you lose statistical power. When we have age specific fatality rates, we would calculate this using the SAME data we ALREADY used to estimate the infection mortality rate of 1%. But the data aren't good enough for this yet.

The fact is that being famous doesn't stop you from dying in improbable ways. And things with a probability of 1% happen to us all the time. IUDs are >99% effective and I have a friend who got pregnant with one in! 1% may seem small to us, but 1% of a million is 10,000. Swine flu had a really low infection fatality rate of .01% and it left 200,000 people dead, because it just infected so many people. Improbable things, applied to a large enough population, become probable, and then they become certainty. You just have to hope *you* aren't the statistic, because someone out there always is.

This pattern of online communication is a pet-peeve of mine:

1. Person quotes something without using quote marks or block quote.
2. People reply to it as if it was an original statement.
3. "Um guise this is a quote, I guess you morons are too stupid to get the reference."

When quoting something, use quote marks, otherwise a) it is plagiarism, and b) you have absolutely no right to feel superior to others for not realising you've quoted something, because that is the correct, normal, and appropriate assumption to make in the absence of quote marks.

Someone posted this on Facebook. I wrote this in response and didn't post it because I have learned to mask ;). 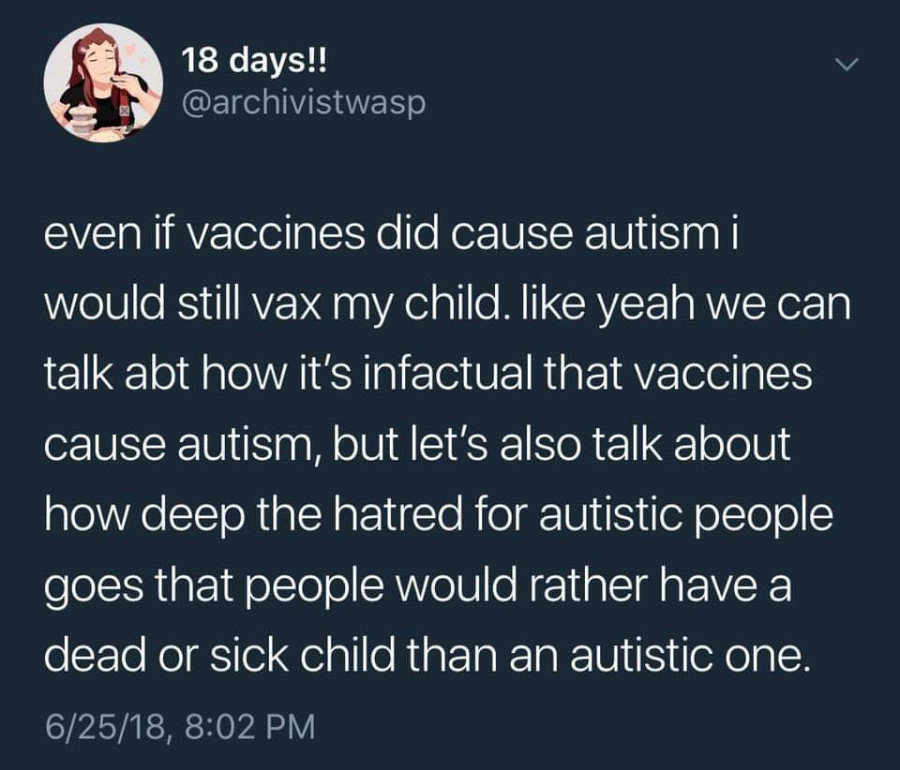 I see this argument a lot and I think it's problematic.

If a vaccine caused disability at a greater rate than it prevented it, the NHS and the CDC and every other national healthcare system would stop giving it. Full stop. I worry that this argument gives credence to anti-vaxxers who think vaccines DO cause brain injury and that that the CDC and NHS wouldn't stop giving a vaccine even if it did and therefore aren't!

What anti-vaxxers get wrong is the probabilities. They *believe* there's a greater risk of a vaccine injury than a disease injury from not getting the vaccine. They are wrong in the facts of the matter, not the idea behind it.

It wasn't until I saw the look of shock pass over my (Catholic) MIL's face when my son casually mentioned "the lemonade god" that I realised had been inadvertently raising my kids under the religion of Terry Pratchett (in whose books there are a multitude of rather silly gods).

Of course the gods in his books are based on the very long human history of animism, which is still practised, and on which plenty of other religions are based on or emerged from, i.e. shintoism in Japan, Domovoy in Russia.

I don't think it's a coincidence that monotheism only emerged once we developed writing; with oral history, a multitude of gods can emerge from a single god; only when a god is trapped in black and white on a sheet of paper does it remain the same god.

Does anyone else find it weird how embedded raffles and tombolas are in school fundraising? In the UK gambling is legal, but you have to 18+ in order to participate. Lotteries have to be state run.